Statement to City Council
by Jean Brocklebank and Michael Lewis on behalf of Don't Bury The Library
September 11, 2018

Look at this picture: 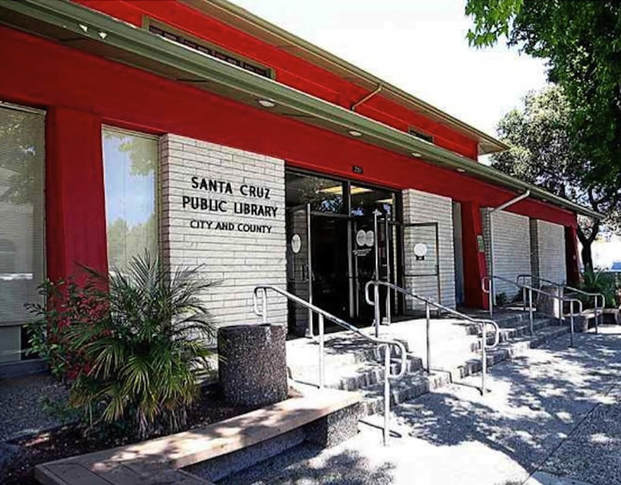 Last month this 2-story 44,000 sf building was described by Library Director Nemitz as being "so underutilized it makes me crazy."

We're not going to demo the Civic Auditorium. We didn't demo the Town Clock, City Hall or these chambers ... just because they are old.

More importantly, protecting and valuing the community's past does not preclude investing in its future or investing in downtown businesses and affordable housing.

Most residents who voted on Measure S would never have voted YES had there been even a hint that the outcome would be the behemoth project presented to the City Council.

Just 5 days ago, when we saw the agenda, we learned that more behind closed doors work has now produced a Demo and Dump plan for the County's main library. Talk about a steamroller at work.

No longer just surprised and shocked, people are disheartened and disillusioned with government. If this Council votes tonite to pass every recommendation handed to it from staff, expect a collective anger to fill this room and permeate the community.

And now some good news!

#1 The City Manager told the DLAC, at one of its meetings, the parking garage is not dependent on the downtown branch being a tenant in that structure.

#2 The Library Director told the public at another DLAC meeting that it's possible to request and be granted an extension to the deadline for spending Measure S bond funds.

#3 The same amount of money to build a new library downtown can be used to transform the existing library for the 21st century.

#4 The city will receive at least another $5.5 million from Measure S, and even if Garfield and Branciforte got a half million total for rooftop solar on each building -- as they darn well should -- that means that there would be close to $28 million for renovation of our downtown library.

What exactly could that mean? Let's take a look at the Option A renovation cost estimate ($24,253,370) in the Final DLAC Report. This is before knowing we'd have another $5 million to spend. It includes all of the following: 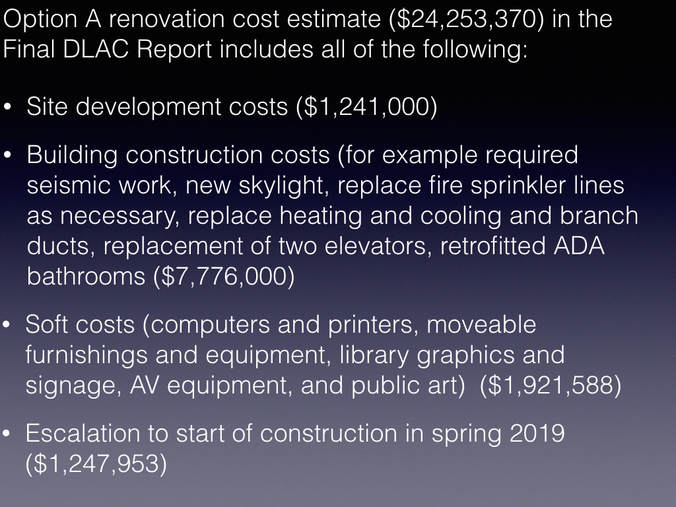 Don't Bury The Library whether in a parking garage or in a landfill.

We appreciate participating in your study session.

We're here on behalf of hundreds of Santa Cruz City and County residents to ask that the Downtown Library be retained at its current location -- renovated, renewed and revitalized -- right where our downtown library has stood for 115 years!

Not only would moving the library diminish it as an integral part of the City's vital civic center, the uniqueness of the library building edifice itself would be lost in the overwhelming domination of the proposed five story parking garage.

Voters who passed Measure S never had a clue they were voting for a new downtown library in a new parking structure. That was not found anywhere in the 13 page ballot measure language, nor in news stories during the campaign. Imagine residents' surprise then to learn that our existing library was to be abandoned, rather than upgraded and modernized.

Most people in the room tonite do not know that this proposed project came from the City's Public Works Director and the County's Library Director, and was presented to Council a year and a half ago, without any prior input from the public as to whether this was okay with residents.

In addition to the unfortunate beginning of this process, consider all of the following:
Finally, for the past four months other half truths have been publicized online and in print, repeated enough to confuse the public.

All of this stuff matters!

We consistently requested a realistic renovation option of the existing seismically-sound library that could stay within a $23 million budget. Unfortunately such a renovation option was quickly thrown together 4 months into the process and just as quickly dismissed by the committee, without serious consideration.

We continue to call for an independent study of what can be accomplished with renovation on the current site versus a newly built library. We've even suggested a creative nationwide contest geared toward design-build proposals. Yesterday you received our five solid recommendations for a Smart Renovation of our downtown library.

In summary, consider these words from Mayor Terrazas, speaking both conservatively and progressively when he said:
Quote: "We should show our respect for the past by....doing a better job of taking care of what we have. We don't just start over from scratch... throwing away everything from our past. Instead, we renew. We revitalize. We transform."
Okay! Let's uncouple the library from the parking garage and demonstrate that a $23 million dollar renovation of the existing Downtown Library can result in a 21st Century library with resources for everyone in our community.